What you THINK about, you BRING about….

I would think about it, too.  I’d wonder if I should join a gym… I’d wonder if I should consider becoming a runner.  Wonder, wonder, wonder… that was my middle name.
Eventually, I started taking some walks, which I’ve really enjoyed.  I even expanded it into some trail walks and hikes.  I mean, this sounds small, but it’s HUGE for a sedentary person – – which is what I’d unfortunately become.
Nonetheless, I’d been contemplating two things.

First Thing on My Mind:  YOGA

Yoga has always seemed so relaxing and so close to meditation.  I feel like it would help ground me and increase my flexibility and strength.  After playing it through my mind over and over again, I finally went tonight to my VERY first yoga class at a cute little yoga studio in town.
I made it through my first class.  THANK GOODNESS it was a two-person beginner’s class.  This way, I could ask questions and fall wobble in my pose if I needed to.  The instructor also gave me lots of beginner’s suggestions and alternate poses to try for the tough ones.  Her sister was the other student and clearly not a beginner, but nice to the new girl (me) just the same.
One other observation:  I had no idea yoga made people this sweaty.  I was definitely sweating all over that borrowed mat (disgusting, I know.)  I need my own, and to take a small towel with me next time I go!
What a great night… and, I feel like I might even be sore tomorrow… Eeks!

Second Thing on My Mind: SPIN

I’ve blogged several times now about the best radio show in the world (Cosmo Radio’s Wake Up with Taylor – – Mornings on Sirius/XM 109).  Taylor, one of the fabulous hosts, is a HUGE fan of Soulcycle in NYC, and they’ve even had the instructor on the show many times to talk about spinning and other Fit Kids topics.  After hearing Tay talk about it for months and hearing Kenny go to his first sessions (even if he puked), I’ve been convinced that spinning is my next move.  All the cool kids (and the FKCST are doing it)… 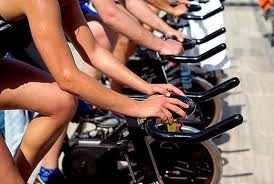 I also feel like spin is perfect for my body shape. PS…. Pears are the coolest! Since the thighs and booty are my biggest areas of opportunity…. I’m pretty sure spin will burn and tone these areas for me!

The COOLEST part is that the place I found – – The Spinning Yogi offers both!  Spin + Yoga = Yay!!!!

Now, the EVEN COOLER part is that they had a Groupon special today for a three-month pass.  AND, I bought it! So, that means I’m going back and I’m going to try out that spin bike once and for all!  Now, to make the Groupon worthwhile for me, I need to go to ELEVEN classes over the next three months.