Special thanks to Jenny Craig for their sponsorship of this post.

It’s officially soup season!  Not only have we seen multiple snow storms here in Colorado, but there’s something about the shift in the time that seals the deal.  If it’s going to be dark (and cold) by 5:30pm, I’m having soup.

Today’s soup is a really tasty one.  I’ve not been shy on social media about my love for the Jenny Craig Stuffed Green Bell Pepper.  While I love it as a standalone and as an unstuffed cabbage roll bowl, it makes an amazing soup as well.

Now, the key to this soup is the additions.  You add a lot of veggies to make this magic happen.  Now, you can use a knife and a cutting board – – no problem!  Or, you could try this little gadget that I love.  Either way, get ready to chop and to be amazed by how cozy this soup tastes. 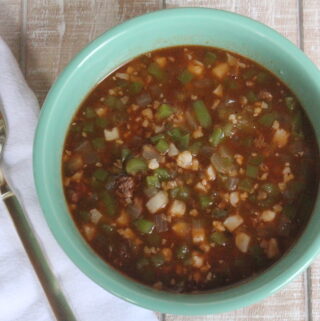 Perfect for a chilly fall day when you're craving soup, this stuffed bell pepper soup is loaded with veggies and will warm you up quickly.
Print Recipe Pin Recipe

Click here to see a full listing of my Jenny Craig Recipe Creations!

Disclaimer:  This post is sponsored by Jenny Craig; however, all of the opinions and comments about the program are exclusively my own and do not necessarily represent that of the brand.