You’ve been waiting for it… and here it is!

I waited to blog this recipe, because I had to wait for the cookbook to arrive with the recipe.  After Beth and I tried several recipes during my time at the Cape, I KNEW I had to own it.  I really can’t wait to try more things in here!

The great things about Weight Watchers recipes is that I know the stats are pretty good.  I’m also AMAZED at how easy it is to make the majority of these recipes.  I sorta turned my nose up at the idea of pre-made BBQ chicken, but it was GO-OD.

I’ve made again since I’ve been home, and it was (again!) completely delicious.

Because I ALWAYS modify, I have to let you know that I added only a tiny bit of cheese and left the sour cream off.  I also added just a touch of Light Ranch. 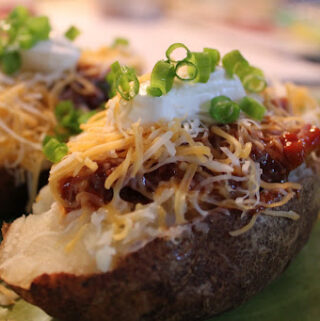 Barbecue Baked Potato | No Thanks to Cake

My sister-in-law made these for me during my first vacation on Cape Cod. It took me back to my Southern roots and the days where we used to order baked potatoes at the barbecue places in Columbia, Tennessee.
Print Recipe Pin Recipe