Of all the recipes I’ve made in the past few months, I’ve begun to gravitate to those that are simple, reheat well, and require the least amount of dishwashing after I’m done cooking.

I can destroy a kitchen in mere moments, and with my new work schedule… I have a finite amount of time at home, and I truly don’t feel like spending these precious moments with a sponge in my hands. I’ve seen recipes for years that show using one pot for pasta, or one pan for fajitas, but I’ve never tried them until now.  You guys, this is the EASIEST (and healthiest) batch of fajitas I’ve ever made.  The chicken comes out super tender, and the lime adds a fresh, bright flavor.  I’m making them again this week… 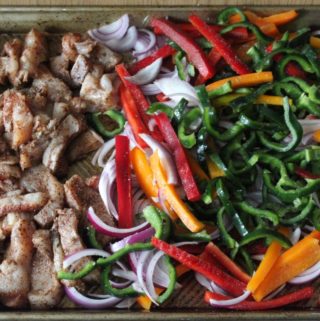 One-Sheet Chicken Fajitas | No Thanks to Cake

Adapted from Half Baked Harvest