Not only did I have a chance to review all the great ideas Jenny Craig members have submitted, but I also had a chance to taste test many of the entries!!!  OMG – – You guys are so CREATIVE!  Such great ideas on how to add Fresh & Free Additions to existing Jenny Craig food, I’ve eaten so well over the past few weeks – – and have you to thank!

In the end, I had to make a decision.  I had to choose the recipe that had the best addition of nutritional content, exhibited creativity, and I’m always looking for a recipe that’s truly transformed one of the Jenny Craig foods.

And the Winner Is…

The Jenny Craig Chicken Street Tacos is easily my favorite dish to use for creative recipes this day, and Jacqueline’s idea is GENIUS!  She makes crunchy tortilla chips out of the taco shells, and loads up the nachos with amazing fresh and free veggies.

The result:  An incredibly filling and satisfying meal that makes you feel like you’re indulging, even though you’re staying completely on track!  Great for game day, Friday night, and all the days in between! 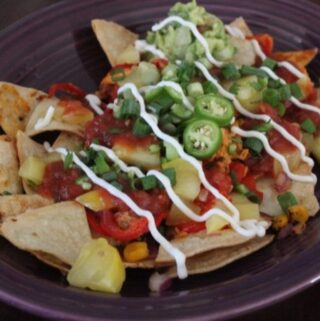 Shoutout to Jacqueline who created and submitted this amazing recipe for the 2016 Jenny Craig Simple Inspirations contest. Hands-down, it was this blogger's winner (and has become one of my favorite meals!)
Print Recipe Pin Recipe

As the NTTC winner of the Jenny Craig Simple Inspirations recipe contest, Jacqueline will be awarded the following from Jenny Craig: a $2,000 gift card, one (1) month of free Jenny Craig food, a Jenny Craig-branded prize pack, and her recipe will be included in a new recipe book that will be released in January!

Click here to take a peek at the other Simple Inspirations Recipe Contest winning recipes.

Disclaimer:  I received compensation for this post from Jenny Craig; however, all of the opinions and comments about the program are exclusively my own and do not necessarily represent that of the brand.